Reading:
Easter Eggs in Software: Our Fun Selection
Share this: 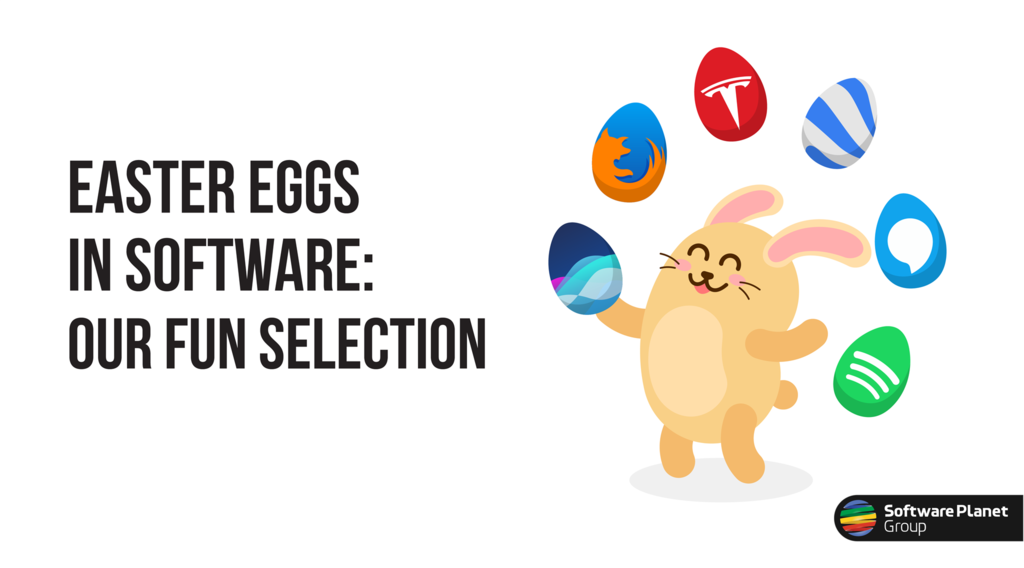 It’s that chocolatey time of the year again! Bunnies are hopping, people are shopping, and the Easter egg hall of fame just keeps getting better and better.

If you’ve hung around this blog for longer than five seconds, though, you probably know we’re not talking about this classic display or even this other luxurious spectacle.

No, ever since Software Designer Warren Robinett cheekily credited himself in a room concealed within Atari’s Adventure game, the popular tradition of Easter egg hunting has grown to denote another favourite pastime — particularly among tech gurus and aficionados.

So to mark the start of our paschal festivities, let’s take a look at some of the best hidden surprises you can find skulking in your devices right now!

Apple’s voice assistant is famously chock-full of Easter eggs, but to most of us, this has always begun with two iconic words: “hey Siri.”

Yet try confusing her with Google’s or Microsoft’s own offerings and you’ll be hit back with some unexpected sass.

“Ok Google” delivers a lethal “Very funny. I mean, not funny ‘haha,’ but funny” clapback.
And when dealing with an uncalled for “hi Cortana,” Siri minces no words either: “That’s like comparing apples and… not apples!“

But thankfully, as long as you revert to calling her Siri, the voice assistant’s usual sense of humour should remain intact. Just make sure you give her some breathing space before asking “can you beatbox?” or “what does the fox say?” With any luck, things will be back to normal!

Of course, everyone knows Siri is not without competition these days, and her Easter egg dominance is equally disputed.

What may be surprising, however, is that the Amazon Echo really knows how to geek out!

“Sudo,” the famous Linux command, followed by a fun “make me a sandwich” will immediately get Alexa excited: “Well if you put it like that, how could I refuse?”

And to bring some Spock to the block, the order “beam me up, Scotty!” also comes with its own personalised response: “At warp speed captain!? The engines will never take it!”

May Spotify be with you

Spotify may not be Spockifying anything anytime soon, but they do appear to be catering to another intergalactic fandom.

On Windows and MacOs systems, just play the soundtrack to any of George Lucas’ Star Wars films and watch as your progress bar slowly but surely becomes a jedi — or sith — lightsaber!

The revelation of Firefox

And though Firefox, for its part, does not seem to be big on the Force, that hasn’t stopped it from creating its own religion.

On any of their browsers, just pop in an innocent about:mozilla in the address bar and you will be sent to a prophetic verse from The Book of Mozilla, like the one in the example below:

“The twins of Mammon quarrelled. Their warring plunged the world into a new darkness, and the beast abhorred the darkness. So it began to move swiftly, and grew more powerful, and went forth and multiplied. And the beasts brought fire and light to the darkness.

But all quarreling aside, when it comes to Easter eggs, it is hard to deny that Google has the upper hand. Go ahead and type “do a barrel roll” into the search engine and you will see what we mean. Or alternatively, follow this link for some jaw-dropping excitement.

Still, in all of the company’s rich repertoire, perhaps nothing is quite as impressive as Google Earth’s secret flight simulator.

Just launch the program’s latest version, hit Ctrl+Alt+A (Cmd+Opt+A on MacOs) and you’ll be ready to go! You can choose a plane, airport and even runway, and fly over your favourite cities — fully rendered in beautiful 3D.

Last but not least, inspired by another holiday, Elon Musk has also joined in on the Easter egg fun.

By simply holding the “T” button on their car’s infotainment screen and entering the code “holiday,” Model X owners are treated to a sensational Christmas light show unlike anything you’ve ever seen.

And best of all, releasing a new Model X Christmas mode seems to have become something of a yearly tradition at Tesla, so keep an eye out for more fun to come!

What are some of your favourite Easter eggs? Let us know on our Facebook page!